We asked Rhonda Fisher, CPO assistant Director and Board Member, Why do you serve at CPO? 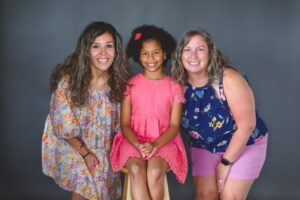 I always knew I wanted to adopt someday, but I just didn’t know how/when/where. When I first heard about CPO, I have to be honest… I was glad it was local, that newborns were their most common adoption, and that it was very affordable. The whole “open adoption” thing was a foreign concept to me but I’m always up for a good adventure so that was fine.
Our first adoption experience at CPO was very difficult, and not just because it ended in an interruption. The personalities just weren’t meshing and I knew it would be hard but I remained resolved to have an open adoption relationship and trusted that God would equip me for the difficulties along the way.
After it was interrupted, we were eventually chosen by a different expectant mother and she was an absolute ray of sunshine. Our personalities definitely meshed! That made my willingness to have an open adoption for the rest of my life much easier, but more importantly, my mindset had changed. Throughout the course of our first adoption effort, I had begun to appreciate CPO’s ministry efforts. I had come to truly love the birth mothers I met at group, including the one that had chosen me, personality differences or not.
My first adoption at CPO was not of a baby… it was of a ministry mindset. I began to see CPO as a great way to serve not only the first mother of my eventual daughter, but also many, many other women, children, and families.
I serve on the board of directors, but I have a much more important job at CPO: mentoring prospective adoptive families. I know many families come to CPO for the same reasons I did: it’s close, it’s newborns, it’s cheap. My job is to guide them through the process. That means answering logistics questions, sure. But on a much deeper level, I’m hoping God will use me to have them adopt a ministry mindset too. I do this by being sure to prepare them for the inevitable difficulties, encouraging them to manage their expectations, reminding them of the birth mother’s needs, and convincing them to allow God to grow them throughout this time.
Mentoring families is my favorite job at CPO, and it’s because I know how extremely important they are in the adoption triad and I want to prepare them to fulfill their role to the best of their abilities. It’s the most rewarding volunteer job I’ve ever had, and I don’t plan to ever stop. It’s too good.