In 2013, we were training our ultrasound nurses for our new clinic.  I’ll never forget!  One of our first ultrasounds was triplets!  You may remember the story of The Justice Family.  Here is an update from Sarah. 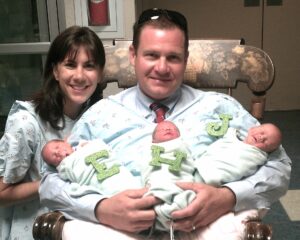 Our Family Designed by God

All I ever dreamed of as a little girl and then as a teenager was to become a wife and mother. God brought the man of my dreams into my life and we were married when I was thirty three and he was thirty seven. Before marriage we discussed our mutual love of children and desire for a large family.

Several years passed and the realization that my biological clock was ticking caused me to feel a sense of urgency if we were to have children. During this time my husband and I were both checked out medically and I had a minor surgery as well as limited fertility treatment. After visiting three different clinics we realized that even with intervention our options did not look promising or financially feasible.

The idea of adoption came up and we were led to Crisis Pregnancy Outreach. We filled out papers, attended training, completed home studies, and turned in our Life book. We were interviewed by several young ladies over the course of two years. One of these ladies chose us to be the parents of the baby she was carrying, then later she decided to parent. This was an extremely difficult time, but the Lord was preparing us for the future.

A little over a year later I received another phone call and was elated when the birth parents told of their intentions to place their baby with us. Several weeks later an ultrasound was done only to discover that we would become the parents of triplets, Joel, Hannah, and Elizabeth, a triple blessing! On May 18th, 2013 our precious babies were born, making me a mother.

The blessings did not stop there. Ten days after the birth of our triplets I began to feel sick and took my first ever positive pregnancy test. Seven and a half months later I delivered twins, Abigail and Andrew. Two years later God graciously gave us our last child, Caleb.

Fast forward eight years, we are a homeschooling family of five-eight year olds and a six year old. There is never a dull moment. I remind the kids regularly of the blessing of having built-in best friends. Looking back, I can see that the waiting allowed me to have a greater capacity to accept God’s plan. The blessings we would have forfeited had life gone as we planned. 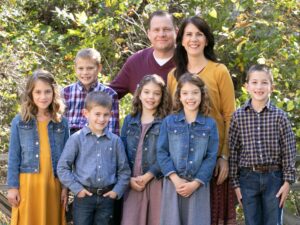 We are grateful that CPO was there for our Birth Mom when she reached out. We are forever blessed!