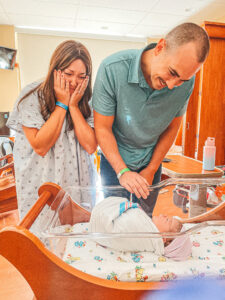 Merry Christmas from CPO!
May this Christmas miracle remind you of Jesus’s love and providence!
He came for you so that you may have life everlasting!

It was the end of September, the crisp fall air was arriving and the leaves would soon begin to fall. Our family of three had been waiting over a year for a new addition to our family without any interest. All of a sudden an expectant mother found CPO and decided to interview us as potential parents for her unborn child. Our interview went well, it was later the following week that we were chosen. We were overcome with gratitude that she would pick us as her child’s parents. A month went by, and as we approached the delivery she ultimately decided that parenting her baby would be the best decision for her. I never knew grief like that. As quickly as this woman came into our lives she quickly exited. The hole in my heart that so desperately wanted to become a mother again sank even bigger. I knew that if any woman felt she could successfully parent, I wanted her to do that. Adoption at any age is trauma and I knew the pain our family felt from that situation was momentary. Though I couldn’t see it, God had a plan.

Fast forward a few months and our family of 3 had just finished dinner. By this point our hearts had healed. My desire and longing to become a mother again was still heavy, but the pain of the ‘almost baby’ had worn off. It was a typical Wednesday night, nothing special about it. My husband was washing dishes as our daughter played at the table. My phone rang and it was CPO. I immediately got butterflies in my stomach. I knew what this phone call meant. This phone call would forever change our life.

‘There’s a woman in labor & she picked your family. I don’t have details, but you need to rush to the hospital to meet your baby!’ We were in complete shock, a Christmas baby! We quickly made plans for our daughter with grandad & settled some last minute things at the house before leaving. Our daughter excitedly asked if we could do our Christmas advent calendar as a family before leaving. Absolutely! We opened the verse for December 8 & my husband read aloud Luke 1:41-47.

When Elizabeth heard Mary’s greeting, the baby leaped in her womb, and Elizabeth was filled with the Holy Spirit. In a loud voice she exclaimed: “Blessed are you among women, and blessed is the child you will bear! But why am I so favored, that the mother of my Lord should come to me? As soon as the sound of your greeting reached my ears, the baby in my womb leaped for joy. Blessed is she who has believed that the Lord would fulfill his promises to her!”

We were in awe of the scripture pulled that night—God had a plan for our family and God had a plan for this child. After we finished the advent we quickly rushed to the hospital. We met the expectant mother’s nurse for the evening. Her name was Fiona and she updated us on the mother’s labor. We learned the expectant mother had spent 5 hours at another town’s ER with no help which led her to a hospital a mile from our house. We were told the mother found out she was pregnant that very evening and immediately knew adoption was the best option for her child. It was this nurse who called Crisis Pregnancy Outreach. She knew that the leaders at CPO would help this woman in crisis find the perfect family for her child.

After Caden’s exciting arrival, his birth mother was still processing the emotions of unexpected pregnancy and an adoption plan, all made in the same evening. She initially did not want to meet us or Caden as there were many emotions to overcome in a short amount of time. Nurse Fiona an adoptive mother herself, confided in Caden’s birth mother that her child only had one picture of his birth mom taken on the day of his birth, a picture he cherishes to this day. Birth mom agreed to meet Caden and our family. It is likely Caden’s entire story changed during this meeting. Birth mom laid eyes on and held the miracle she helped create and she was able to see the beauty of open adoption. She visited Caden at least three more times before we left the hospital. We have since had dinner together and even met up for Caden’s first visit to Santa.

We joke that Caden entered the world after 9 months in “Stealth Mode.” He somehow managed to evade detection until the day before his birth and enter the world in a spectacular fashion. We love our little boy, but his life would have likely been much different had he decided to make himself known. We are thankful that his birth mom decided to choose us as his parents under such extreme circumstances. She is truly a superhero and so strong to carry a baby and not even realize it! We hold an immense love and gratitude in our hearts for the woman who made us parents once again. 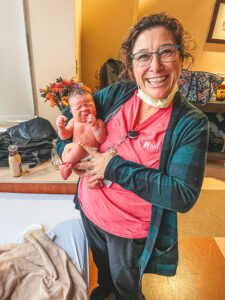 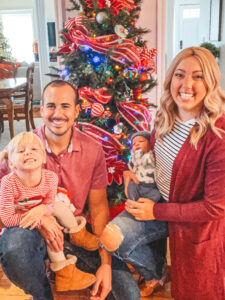