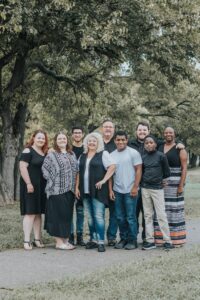 I have shared with most of you about the abortion I had when I was 19 but I haven’t shared as much about how God healed me, or actually is healing me.  If you are reading this and need healing from abortion, please reach out to me.  There is hope and forgiveness waiting for you.

After my abortion in 1983, I struggled with life.  I was not walking with the Lord even though I was a believer.  I was lost and confused.  About 4 years later, after a failed engagement, I hit bottom.  I felt beat up.  I felt hopeless.  At this time, God brought me a dear friend who invited me to attend a thriving singles group.  I finally surrendered surrounded by those who later became lifelong friends.  I came to the place where nothing mattered but Jesus.  I didn’t want to fight anymore.  I just wanted to live for Him.

Not long after that I met my husband.  He was the first Christian man I had ever dated!  When he proposed, I knew I had to tell him about my abortion.  I knew that this might be a deal breaker.  I knew he might say, “what kind of woman kills her baby?”.  I was terrified!  But I told him.  He showed only grace to me.  And then I realized that God would too.

We married and when we became pregnant, again I was terrified.  I didn’t deserve to have a healthy baby.  I knew I would somehow be punished for what I had done.   I was listening to Focus on the Family one day when they had a guest sharing about healing from abortion.  I was mesmerized!  I hadn’t really considered taking steps toward healing and seeking God’s forgiveness.  Actually, at that point I think I knew God forgave me but I needed to accept that forgiveness and forgive myself.  The radio guest shared practical steps toward healing such as, giving your baby a name, creating a memento, writing your child a letter, mourning your loss, and serving at a crisis pregnancy center. I began working these steps.

I mourned not seeing what kind of person my child might have become.  I mourned the grandchildren I might have had.  Maybe I will always mourn.  But I know I am forgiven.

I’ve often wondered if I had known about a place like Crisis Pregnancy Outreach, might things have been different?  CPO was founded the same year I had my abortion.  I wonder…

But I know I will be reunited with my child in heaven.  And hopefully someone reading this story will find hope and healing.  I am now the mother of seven healthy beautiful children.  Not only did God forgive me, He blessed me more than I could have imagined.

2 thoughts on “Healing from Abortion”