Each month we will feature a “retro” CPO article, one that is pulled from our archives of quarterly newsletters. Whenever possible we will provide details regarding the author and date of publication.
This month’s Retro CPO article was written by Becky Martin, one of Cheryl’s assistants at the time. It was written in fall of 2008, and is her personal testimony.

It is my great pleasure to serve as an assistant director of CPO under the amazing leadership of Cheryl Bauman and alongside several other Godly women.
I came to know my Savior Jesus Christ on November 1, 1970, and from that day forward, my ambition was to serve Jesus as a missionary. I attended schools in Tulsa and Broken Arrow, where I graduated in 1980.
When I was a child, while traveling down I-40, I passed Oklahoma Baptist University. I could see the steeple from the highway and when my parents told me that was OBU, I said, “That is where I’m going to college.” My parents did not go to college and this worried my mother, because we didn’t have a lot of money. She mentioned this to our pastor’s wife at the time. She told my mother that God would provide a way. He did!
As some of you will remember, the early 80s were not a good time in our economy, but I remember, vividly, one semester when I went in to pay. My dad had told me to just write the check and he would put the money in my account. I had some scholarships and grants so I thought the bill would be close to $1,000. When it came my turn to pay, the clerk tallied it up and said, “You owe eighteen fifty.” I said, “$1850.00?” He said, “No, $18.50.” I was so excited! I went immediately to call my dad, who acted like it was no big deal. He knew God was in control.
I graduated with a Bachelor of Arts degree in Elementary Education. I majored in Elementary Education so I would have a trade to take with me to the mission field.
It was very difficult to find a job in Oklahoma, so I got my first gob at a private Christian school in Florida. While I was working that year, my relationship with God grew and I learned a great deal. I was also communicating with an orphanage in Mexico about coming there to work.
Unfortunately, as it seems to happen sometimes when you are on the brink of your destiny, I made some bad decisions and became pregnant. I did not believe in abortion and I didn’t know anything about open adoption, so my plan was to come back to Oklahoma, live with my mom and brother, and raise my son on my own. Zach was born January 9, 1986, and was very healthy.
I was so worried that God was mad at me for messing up all His plans for my life, that I ran from Him for a while. In May of 1987, I won a car! I felt that He was saying He was going to take care of me and He was still my Father.
It was an extremely difficult time, raising Zach on my own with no child support. I did have a good job and a new car, but Zach didn’t have an earthly father. I met my husband when Zach was 2 years old, and we married two and a half years later. Phillip and I have now been married close to 18 years. It wasn’t always easy having a child who was close to 5 years old at the beginning of the marriage, but again, God helps us become a family. Phillip and I were blessed with a baby girl, Sarah, on June 19, 1991.
When we became members of Christian Chapel, Cheryl came to speak one day about the needs of CPO. As she was speaking, Phillip turned and looked at me as if to say, “Now you can do what you’ve always wanted to do, be a missionary.” Even though I thought my mission field was working with children, which I did do while teaching for 14 years, maybe God’s plan were different. Or maybe, as romans 8:28 says, “And we know that all things work together for the good of those who love God, to those who are called according to His purpose.” I have enjoyed working with the girls and women who have come through the program. I have learned so much from them and I have been able to share my story with them, in hopes that my struggle would encourage them to seek God’s will for their situation.
For me, 2007 was a very eventful year working with CPO. I saw so many miracles. Many times, we all wondered why things were happening the way they were, but God’s plans were always better than ours. He did some mighty things in people’s lives, from saving several babies from abortions to saving the lives of some preemies and sick children. I call 2007 “the miracle year.”
I praise Him and thank Him all the time for allowing me to serve Him as a missionary with CPO. I am also grateful to Cheryl for this opportunity and to all the couple with whom I have had the pleasure of working. My faith has grown through watching your adoption stories unfold. My goal now is to keep working with CPO and not let anything stop me. God bless you all. 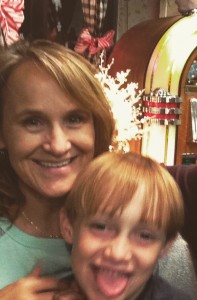 A recent photo of Becky, still an active CPO volunteer.