Amanda didn’t want to be a drug addict. She didn’t like the kind of person she was when she was using. “You wouldn’t want to be around me when I was on drugs,” Amanda divulged to a group of adoptive families about her journey as a CPO birth mom. She knew this to be true because even those closest to her were unable to tolerate Amanda’s behaviors. Her addiction created danger and pain that drove a wedge between herself and others. I and the other families listening to Amanda’s story learned that even a year after emerging from the dark valley of addiction, Amanda was homeless, alone, and—pregnant.

Amanda didn’t turn to CPO for assistance with her pregnancy right away; she thought about all the options, including the choice that would have terminated her pregnancy and denied her of the incredible healing and bonding which came about when she sought help from CPO. “I was accepted and loved since the moment I walked into CPO,” Amanda explained. “I didn’t know what was going to happen to me each day, but I knew if I picked up the phone and called someone at CPO, someone would talk to me until the phone died.”

Surrounded by unconditional love and consistent support, Amanda began to make choices for herself and her baby. She accepted encouragement that led her to receive many of CPO’s generous services, and she made an adoption plan for her unborn baby girl. Pivotally, she allowed Rhonda and Jarad, the couple with whom she chose to place her baby, into her life. They both, but especially Rhonda, shared in her struggles, her recovery; they understood her choices, her intentions. “She’s like the sister I never had,” Amanda shared about Rhonda. Amanda sees Milly (age 9 months) regularly. The vitality and goodness of Rhonda and Amanda’s bond is evident. There is a mutual admiration and respect that is so profound. As a waiting mother hearing Amanda’s incredible journey for the first time, I am filled with appreciation for the courage and transparency Amanda sustained in order to tell her story. Our hearts were moved by this witness to the strength of God’s hand to forge these crucial bonds and Amanda’s strong resolve to continue to make positive changes in her life.

Precious Milly is reason enough, Amanda explains. “They (Rhonda and Jarad) are two more reasons why I should never do drugs again. I want them in my life.” 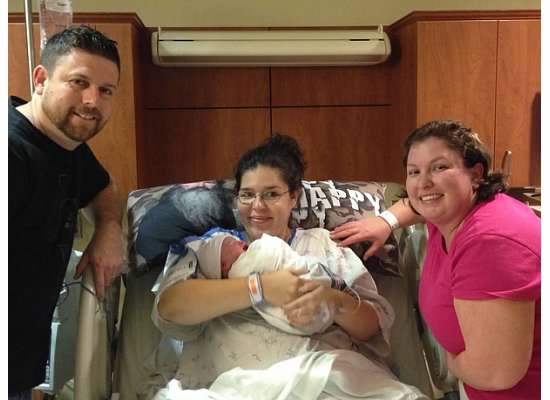