The Four Words I would Say to my Birthmother

I’m Proud of You 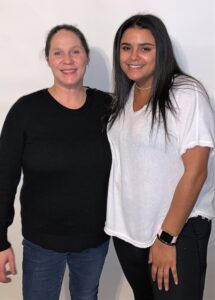 is Ahnah Katsis and I am 23 years old. I was adopted at birth and have always known my birth mom for as long as I can remember. My parents have always been very open and willing to answer any questions I have had about my adoption. My birth mom has also been the same way. I have many memories about growing up and my birth mom being there. From her wedding when I was 3, to my kindergarten graduation, to countless sleepovers at her house, many birthday parties, my high school graduation and just random times of showing up at her house just to hang out with her and her kids. I have never not felt welcomed by her and also knew I had a place in her heart as well as her other biological children. I have always loved her and felt loved by her and never felt like she “gave me up”. Being adopted has really changed my life and a lot of my friends’  lives. I have been telling my story for as long as I can remember and in a way have been educating my friends about adoption also and now they can tell my story and educate others.

My story is not like a lot of other adopted kids’ stories though. Even though many other children (especially who were adopted through CPO) have open adoptions, my story of having a very close and personal relationship with my birth mom is rare. An example is my brother who was also adopted through CPO and has an open adoption with his birthmother, refers to her as “Miss so&so” rather than just her first name like I do mine. Another example is a very close friend of mine who was adopted through CPO not long after me, has a very rough relationship with her birth mom that has caused her a lot of pain and sadness in her life.

The relationship I have with my birth mom is definitely more of a friend relationship than a parent-child relationship. I have always been able to talk to her and address her like a friend. She also has never tried to punish me or told me what I’m doing is wrong. I feel as if she has always shown respect to my parents in that way. As I have gotten older and experienced life a little more and found out who I really am, I have been more open to talking to her about those things. For instance with school. I went to 3 colleges before dropping out and when I felt the guilt from that, I talked to her about it and she reassured me that she was never a big fan of school either. It was nice because we had something in common and it was good to hear that it was not just me who felt like this. Another thing is the depression that I have gone through. I talked to her about it just to maybe get an answer as to why I was going through it. She told me that it ran in the family, she didn’t have it, but her mom did and that is probably why I have it. It is nice having this relationship with her because even though we don’t have all the answers, I can find out a little more about myself that I might have never gotten the chance to know.

I never really went through a period of thinking my birth mom didn’t want me. She always reassured me that that was not the case. My parents also made sure to let me know. I’ve always understood that what she went through was very hard and she was so young and could not take care of a baby and that she specifically picked out my parents to raise me. Now at my age, I can not even begin to imagine what she went through when she found out she was pregnant. And how she made the adult decision to look for other options because she knew she was not capable at that time to raise a baby. I don’t know if people who have not been associated with adoption know what it is really like to have to go through something like that. Like I said, as I’ve gotten older I have really tried to put myself in her shoes and really understand what she went through, not because I felt like it wasn’t the right decision, but more so to understand how much of a grownup decision she had to make at 16 years old with not much support in her life.

I am thankful every single day for my parents. They are the best people I have ever met in my life. I am the oldest of 8 kids, us older 3 were adopted through CPO, the middle 2 are biological, and the younger 3 are adopted through foster care. Both of my parents have the most selfless hearts. They have helped so many people in their lives and continue to do it everyday. If were being honest, my mom still helps me make decisions and helps me through things and I’m 23 years old. She doesn’t have to, but that is the type of person she is. She really puts everyone before herself and it shows. My dad is the same way. I literally could not think of better people to be my parents and I am not only thankful to God, but also my birth mom because she found the exact right people to place me with. It has not only helped me, but it has also helped her. I have never told her personally but if there were four words I could tell her that really show my genuine love for her is “I’m proud of you”. I don’t know if she’s heard that at all and I don’t know how it feels hearing it from the child that she placed for adoption, but I really am proud of her. Making that decision had to have been one of the hardest decisions of her life and it really means the world to me that she made that decision not only for me but also for herself and stayed to tell me about it.